Notes on the film, Moonlight

Last night I saw Moonlight. It played to an audience in city centre Manchester, UK. The 200 seater cinema was two thirds full, with an audience approx 80% white. 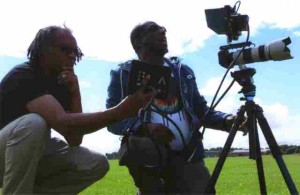 • The film is noticeable for the complete absence of any white characters. This removes one of whiteness’s central tenets – that there must be a white point of view that the film viewer can watch from, and that this point of view should be the dominant one. Instead, paradoxically, the white viewer is forced to inhabit at various times through the film, a series of black points of view. Almost the entire universe of the film and all its attendant points of view, are black.

• One of the inescapable effects of racism is that it hyper-masculinises the black male. (see article on this here : http://www.thenewblackmagazine.com/view.aspx?index=537). Moonlight is a triptych: Tyrone, at three stages in life – child, adolescent, adult. By juxtaposing the vulnerable child Tyrone and the equally vulnerable adolescent Tyrone with the later adult Tyrone, the hyper-masculine presenting adult is rendered sympathetic to white eyes (as well as to black eyes – since black people arguably are as likely to be ensnared in this hyper-masculinity semiotic net as white). The erasure of personality – of any sense of there being in this black male body a unique, vulnerable human being – which is one of the effects of hyper-masculinity, is thwarted by the three-part narrative strategy. It’s brilliantly thought out and executed. The jump cuts in ages also give a ‘dreaming’ space in the film where the viewer can construct in their imagination the details of how one stage led to next. How the child became the adolescent, became the man. It’s a beautiful “telling by not telling”.

• The film does not use an establishing shot at its beginning –no bird’s eye view of the district etc (for this method of visual storytelling see for eg Coming To America). Instead it brings the viewer in close quarters with the characters from the get-go. In doing so, it slews off all the sociological contextualising that can make our attention fade – we know that black urban deprivation story, it’s been done many times. Moonlight’s filmic style is closer to the stream-of-consciousness novel technique than the Dickensian storytelling style. There is something going on in Moonlight with the use of shallow depth-of-field that reinforces this. It’s not naturalism – the stereoscopic human eye mechanism generally pings back and forth in the depth of field to bring a deep awareness of surroundings as well as focal point. The Moonlight camera operates usually on a close focal point without much depth of field. This feels like it works on an emotional plane – this is what the characters feel – it shows what the characters would see with their heart. Remarkable also is the intense poetic framing of the shots and the exquisite colouring the film has undergone. You could hang almost every frame of this film in a gallery such is its visual poetry. I’d be interested to hear from big format film makers I know such as Gbenga Afolabi, Clive Hunte or Pavel Prokopic on what is going on technically with this camera work and colouring. They’d know much more than me!

• It’s a cleverly positioned film in that the story can reach both white and black audiences while saying different things to these audiences – it has enough levels to do that. If they so wish, a white audience can say, oh this is a coming-of-age film about a black gay man. And that’s OK. The narrative allows that limited reading of the film. They don’t need ask the more difficult questions: what led to Tyrone’s mother and father being so incompetent/ absent parents, what caused the grinding poverty, how did it come about that drugs became a normal career choice in that neighbourhood: ie they can ignore the social context at will. The film permits it. Black audiences may contextualise the film more in their minds, may extrapolate much more. Audiences in African countries may see it as a gay film. There isn’t one ‘correct’ way to view it.

• The acting out of inarticulacy is superb by all three Tyrone’s: their silences talk so much. The narrative flips from public to private individual (from public Tyrone to private Tyrone) is the heartbeat of the novel. In that oscillation, in the trauma of that constant, fraught voyage, is all the pain of the film.

• Plot wise, the film is simply set up: it uses the ‘humiliate your character early to get the audience to bond with them’ device found in eg the plays of Ibsen. Who cannot root for a small, hugely neglected kid getting bullied mercilessly?

• The gold tooth jewellery (grills, fronts, golds) works both on the symbolic and the pictorial/cinematic levels. Tyrone has to remove his tooth jewellery to eat. There are moments in the film when this jewellery is so brilliant, so beautifully framed that we go past its contemporary hustler ‘showiness’ meaning; and in those moments Tyrone’s shimmering smile in all its radiance becomes as beautiful as a Benin bronze; Tyrone seems to know this, at times he peeks from behind this beauty in all his engaging vulnerability. And you think, yes Tyrone is fucked up, and yet… his soul is as pure as that gold – you see the kid in him again.

• Thinking wider, about what stories are possible, my mind turns to general comments of the cultural critic, bell hooks (Yearnings) and of the author Toni Morrison (Playing in the dark: Whiteness and the Literary Imagination): we need multiple stories – multiplicity and particularity. So any one film, any one story does not have to represent everything. And we need radical black subjectivity – we need to write the stories that rise above the stereotyping, the easy labels that society is prone to tag us with. Moonlight is a start. For continuation of that project of multiplicity and particularity, roll on the film about the black women NASA scientists.

• Possible end note. I saw this film with my teenage daughter. On the way back, at her urging, we went into a late night McDonalds restaurant in the city centre. It was crowded with the Friday night post show, post concert and plain nowhere-else-to-hang-out crowds, mostly (say 70%)white, but not exclusively. The only seats were next to two early teen black boys –they looked about fourteen going on twenty. They were guarding their space – with stiff legs and hard-faced expressions. As my daughter stood in the queue, I sat down on one of those spare seats. They tensed further. My daughter shouted out across to me, “Dad, do you want a large coffee or medium?” “Large!” I replied. Something changed in them. Their manner dropped five years, they thawed, had excited exchanges about what they’d seen that night, made furious bursts of texting on their phones, smiles, laughter. And somewhere in my heart, a tear fell, because it was the end shot of Moonlight, remixed: the acting tough melting into humanity.