This is it. This is your moment. You’re almost there, about to be picked by the best team ever, ready to become the new face of the football scene, a Manchester United player. And then, slowly, your dreams start slipping away. Marcus’ life used to be great: a fantastic football player, cool friends and decent grades. But facing racism and feeling left out because of his disability, his courage and ambition are put to the test. Dealing with shifting friends, crazy parents, Marcus will have to gather all the strength he can find –in others as well as within himself.

“A compelling story about a boy losing his hearing. Pete Kalu is a wise and sensitive storyteller.” Rajeev Balasubramanyam, author of In Beautiful Disguises

“This a book full to the brim with the joy, heartache and passion of the beautiful game. Along the way it deals with racism, disability, bullying, jealousy, young love, family life and friendship – all without a single patronising or forced word from beginning to end. It’s written in beautiful clear prose and tells a story that every lover of football and life will instantly understand.” Melvin Burgess, award winning YA author “YA novels featuring a protagonist from a ‘culturally diverse’ space are rare. Pete Kalu’s, The Silent Striker in which Marcus, a gifted footballer, confronts and overcomes many of the challenges of young people his age, is a welcome addition to British writing in this genre. The Silent Striker is a strong inspirational story about human aspiration, overcoming and achievement.” Jacob Ross, novelist “Touching, funny and well tackled!” Dr Muli Amaye, novelist “A richly compelling, emotionally resonant tale of courage.” Melanie Amri, award-winning author “I have never understood the bigotry that has existed against deafness so I welcome a story that discusses it alongside cultural identity in a voice that is clear and understanding. This is a book that needs to be sat on every school library shelf as well as a role model of achievement. Well done Kalu.” SuAndi, OBE, poet 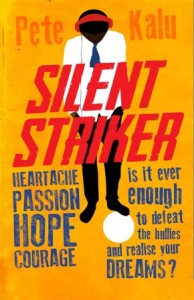 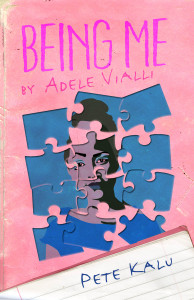 Being Me: The Secret Notebooks of Adele Vialli

There’s never a dull day with Adele Vialli: she’s the star of her school’s football team with an impossible
frenemy and a troublemaker attitude. Throw in a warring family, a spot or two of shoplifting and being a girl
in a ‘boy’s’ sport, Adele’s life is stressful, to say the least. Underneath all this is Adele’s constant questioning
of her racial identity, and the confusion of having to ‘perform’ being black for her darker skinned best friend
Mikaela.

When an England scout comes looking for potential new players, Adele’s future seems full of promise again.
But competing with her fellow footballer and volatile best frenemy Mikaela could spell disaster, especially
when her city banker dad suddenly starts flirting with Mikaela’s mother. As pressures mount, will Adele
overcome all or will she crash and burn?
The third standalone book in The Silent Striker series, Being Me is an honest, tender and witty examination of
the nature of friendship, family, the complexity of black identity and growing up in the culturally-diverse
Britain today.