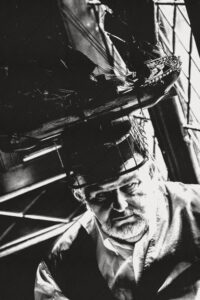 The National Trust and Napoleon’s Hat

I first met Napoleon at a sign language class. He wore a bulky black greatcoat, a two-cornered hat and apologised for his presence, explaining he was due to meet his troops later in the day at Bassano but had dropped by through a portal. We students all rolled with it and, as weeks became months it dawned on us the young man really thought he was Napoleon. Eyebrows were raised. Some would make the sign for madness but I felt there was nothing to see here – the man was happy as Napoleon, he was a perfectly civil guy, and, if somebody had to represent Napoleon in this world, he was doing a fine job of it. I confess, I kind of fell in love with him. He lit up the college and whenever he appeared suddenly your own real-world problems looked small-small. How else could you feel when faced with a guy worrying about the oncoming battle at Waterloo? Abhorrent to me then, was the idea that some mean-spirited puritanical psychiatrist might try to strip him of his delusion. What would it achieve? Who wanted to see him reduced to his prosaic birth name, rocking in a corner of the class, and all of us a little duller, no longer lit by his light? Some delusions are fine. Let them be.

Nations like their delusions too. America: Sweet Land of Liberty! That the United States was arrived at by the genocide of the indigenous population, the subjection of enslaved Africans, and the brutal expansion of its core lands by war and subjugation is not a story many Americans want to hear. Indeed, the myth of America’s rise by moral exceptionalism holds such a strong grip on the American imagination they are offended when you raise such contrary facts.  So too France. Land of Rousseau. Of Liberté! Égalité! Fraternité! But not for the enslaved who eked out an existence under the French whip across the Caribbean. And of course, England. England never had its Rousseau. The closest was Cromwell but he arrived a century too early. British belief in Enlightenment values was for a long period distinctly untroubled by any doubt around slavery or British involvement in the transatlantic slave trade. In a neat bit of classificatory footwork, those enslaved by the English were relegated to the category of lesser humans, and the colonising, enslaving drive recast as a civilizing mission undertaken by the noble white man as part of the ‘white man’s burden’. It was a fine act of national sophistry.  And it was supplemented with myth, with monument as the answer to the question: How best can we chisel the story of our greatness, our graciousness, our nobility into history?

The Egyptians were the primus inter pares chisellers. Their monuments did the all-time- greatest job of proclaiming the brilliance of their Pharaohs. The voice Shelley gave them, feels just right:

Look on my Works, ye Mighty, and despair!

So, what about  the National Trust properties? They were often donated during a period of dynastic distress. Typically, the owners hit hard times after the Second World War and offered the crumbling mansion to the nation with an implied (or perhaps actual, legal) codicil that the Trust look after not only the bricks, but the family story too: the sentiment – if not the letter – a plea that the National Trust preserve not only the land and buildings but also the story of our family’s glory, our ancestors’ sagacity, nobility, generosity, vision etc.

The Egyptian’s chiselled, Pharaoh voice is the only voice that distinctly survives from that era, no one else could afford the chisels and chisellers. Some of the country homes have their dynastic story leaded into stained glass windows or imbued in leather-bound mahogany desks. But, unlike the pyramids, English country homes were built and furnished at a time when recording had become cheap and when cataloguing, archiving, keeping copious records had become de rigeur as part of the general colonising project. Naturally, historians – those crawlers over documents – have wormed their way into these archives  to gather contextual information, and in doing so have found themselves querying the story of unalloyed nobility and generosity that the country homes by their substance enact. Such scribblers as UCL Legacies of British Slave Ownership project (https://www.ucl.ac.uk/lbs/), and the research of a body of treasonous academic folk such as Marian Gwynn, Corinne Fowler (@ColonialCountr1) and Katie Donington have followed on the heels of England-based slave trade historians, James Walvin and Alan Rice, in querying the country homes’ long-buffed, saintly image – with such evidential accuracy that their research is seen as an attack on the English national myth no less. Cue outrage.

Alacrity is abroad and everywhere. America. France. England. Nations with deluded ideas of their past. Nations hugging their myths and unwilling to absorb information that runs counter to those myths. The archival diggers  are denounced as traitors. Unpatriotic.

Yet do not all myths of Empire founder? Do not all monuments meant to fix myths and perpetuate stories of glory, go the way of Ozymandias, eroded by the slow truths that time brings to them? As Shelley has it of Ozymandias:

Nothing beside remains. Round the decay

Of that colossal Wreck, boundless and bare

The lone and level sands stretch far away.

Or does a nation find a way to allow such delusion to continue – the trauma of Reality being too great for the nation? If so, should we all hug our delusions? Should we all be walking around wearing Napoleon hats?