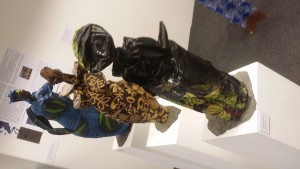 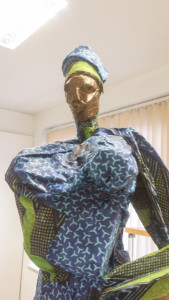 There are a number of works in the exhibition, including 2D paintings, plinthed 3D figures, a video installation and a glass cage of curios. I looked primarily at the three women sculpture named Okoh Women Series – see photo.  The three women are dressed in African wax print fabrics. I’ve seen such fabric worn in Nigeria to weddings, thanksgivings and public celebrations. – they are not rare garments, but neither are they workaday clothes. The women look mobile – as if dancing, though perhaps I am influenced by the video installation showing the artist herself dancing. The faces on the three figures are individually distinctive but not individuated: they appear archetypal or ancestral; to my eyes they have in form something in common with the Yoruba Gelede masks I studied when researching for a Carnival band one year. Again, the context may be influential. Around them are other, free-standing figures, soaring from steel-looking plinths that have more classical African mask images embedded in the plinths, almost as guardians.  In contrast, the three women have an aura of modernity. They are celebrating what? I wonder. There are three women. Why three? Two is an intimacy.  Three is a group. So this is an expression of a group, some joy between them or symbolised through them. Then the thing of surprise. They are standing on slate. Welsh slate, to my eyes.  The northern rooftop material. Not only slate, but reclaimed slate – it still has the old holes where the original clout nails were knocked in and subsequently yanked out.  And this does something.  It locates these women in Northern England, slate being part of the vernacular of the Northern English landscape. And I find myself imagining a roof somewhere in the North under which perhaps these women might have danced. And looking at them, I’m thrown to memory – of how often on a grey day in Manchester I’ve been cheered by visiting a West African home, most times not luxurious, often that of someone or some family struggling to make ends meet. But the irrepressible African spirit would be there, under that grey rooftop. It is the reclaimed slate the figures stand on that brings this installation into the Here and Now, that speaks of Diaspora. The slate pulls in all the standard UK iterations and folk memory  of art that evoke a narrow, white Englishness – from Lowry to Constable to Turner – and layers onto this base of grey the three African women’s vibrancy, their colour and vigour.  It is a juxtaposition that brings the piece from technical excellence to wonder, making the art grounded and of its time, yet also radical, and timeless in its beauty.