The cultural theorist Paul Gilroy notes in his seminal text After Empire, how ‘Englishness’ is constructed. He points out that historical amnesia and postcolonial melancholia are persistent elements in conventional  ‘Englishness’ narratives (Gilroy After Empire 2004, 95-100, 116-120).   The National Trust, with its 1907  foundational purpose of ‘permanent preservation’ has such conventional narratives available to it and it uses them. So a September 2019 tweet (screenshot below) suggests as an activity: “Discover how top-secret map makers and allotments grown in the dig for victory played an important role in our wartime history.”

This tweet shows admirable dexterity. It manages to combine several ‘Englishness’ tropes: ‘map making’ with its allusion to Empire;  the Home office sponsored slogan,  ‘Dig For Victory’ – a reference to England’s much narrated ‘victory’ in World War Two; and most imaginatively, the tweet also manages to squeeze in a reference to that quintessentially English phenomenon (and I have one!) of the allotment. 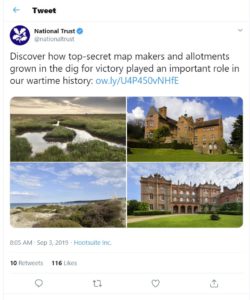 Yet there are other narratives available. And some artists, myself among them, want to unsettle this rather cosy version of Englishness. We are focused on putting forward narratives that acknowledge and move closer to the centre of meditations on Englishness, the depredations, cruelty, stereotyping  and symbolic violence which underpinned the British Empire and colonialism. Violence which still affects us today in all its symbolic, linguistic and conceptual shockwaves.

More specifically, we seek, through our art, and by a re-examination of historical lands, buildings, artefacts and archives, to foster the rise of suppressed and hitherto unheard voices – including voices of the ‘Other’.  The Leicester University based Colonial Countryside project has gathered some such artists together – primarily writers. Twitter and Facebook abound with other organisations, artists and historians  seeking to  transform understandings of how Empire and its successor, colonialism, has affected national identity.

The poem which forms the lyrics of ‘Bluebird’ was inspired by the lock, stock and barrel of Penrhyn Castle, a National Trust property in North Wales. Penrhyn Castle itself is a marvellous trompe l’oeil – a stately home  built between 1820 and 1833 (just before the Victorian era)  but presenting itself as something more ancient: a Norman castle.  Thus, the issue of presentation, representation, reality and authenticity is mixed into every brick of the property.  It is a magnificent structure, not only in its architecture. It is decorated and furnished so as to proclaim its owner’s sophistication, civility, good taste, aristocratic roots, wealth, knowledge and power. Nobody who visits can be left uncertain that the primary story there is of the Pennant family’s importance in the world.  The poem is a counter-narrative. It refers allusively to the slave trade origins of the Pennants’ wealth, using imagery to indicate objects in the Penrhyn Castle display –  such as stuffed birds and paintings – where slave trade and colonial connections can be found.  I won’t spoil the poem by pointing out all these references.  But a visit to Penrhyn Castle with the song on your headphone’s playlist would be enough to reveal most if not all! 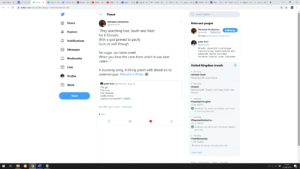 The basic musicality of the poem supplied the beginnings of the song.  From this, the song itself was developed, composed and arranged by my 15 yo daughter, Naomi Kalu.  We argued about whether the last, consolidating, note of the song should or should not be played (she won the argument – in the video it is not). 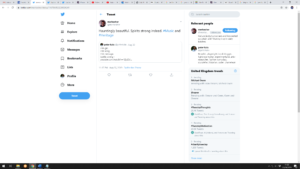 Jonny Ferryman shot all the video footage in two hours at Penrhyn Castle.  He then edited the video, adding some acoustic effects (the bird song, the sea waves).  Charlotte Maxwell assisted in the direction and with costume. The sound editing was done at HQ Recording Studio. 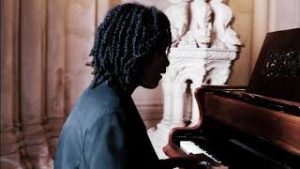 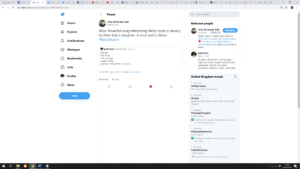 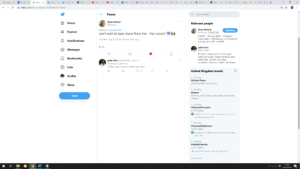 *The consolidating statute (National Trust Acts (1907-1971) puts it in glorious legalese : “The National Trust shall be established for the purposes of promoting the permanent preservation for the benefit of the nation of lands and tenements (including buildings) of beauty or historic interest and as regards lands for the preservation (so far as practicable) of their natural aspect features and animal and plant life.”