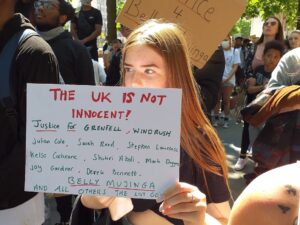 It is snowing here in Manchester, England, the evening of 7th January 2021.  I’ve been watching across media astonishing images of the US Capitol building being invaded by an aggrieved white mob. My mind turns to the summer of 2020 when the Black Lives Matter movement landed here in England. It ignited much soul-searching among the majority white population of England.  While triggered by the USA George Floyd video, there had been in advance of the Floyd video a groundswell of unease at police action in England, an unease that competed with the cuddly images of British police that have prevailed for decades in England, promulgated by  TV series from Z Cars in the 60’s all the way through to Inspector Morse and  Lewis of 2015. The bedrock moral position of these British TV cop series was the fundamental decency of the British police force.

There were of course voices that dissented from this cosy view, many of them black. The poet Linton Kwesi Johnson in his poetry/song collection Dread Beat and Blood (1975) in particular denounced the London police force’s Special Patrol Group (SPG: similar to Nigeria’s SARS). The SPG was disbanded in 1987. But police misconduct in England persisted. Most recently a documentary film called Ultra Violence (November 2020) held an unwavering gaze on continuing British police force brutality and state killing, particularly of black people, platforming the voices of numerous families who had lost members to brutal police hands and who have bravely campaigned at grassroots level against this ultra-violence.

Something snapped here upon the release of the George Floyd video. Finally, abuse that had been hidden away, dismissed, denied or contested was caught on film in broad daylight and shown across the world. People in England were roused to righteous indignation. George Floyd, they were saying, is our experience too.

Let me pause now to unpack the ‘our’ in the statement ‘our experience’.  Because it signals an important shift, and one that is observable in the photos taken of BLM events across England. There are black folk in the photos of protestors, yes, but also by many young white people: White people, especially the young ones, were owning their part in the problem. It is this shift that holds promise. Black power salutes being wielded by white youths in solidarity with their black friends. White privilege was finally being understood.

Of course, there is a backlash. The invasion of the US Capitol by White Supremacists is the most recent example. But no battle for justice is ever easy.  And in so far as the young people in England are on the side of fairness and prepared to stand up and be counted,  campaigning in public for an end to the brutality of the unjust use of force by police, in that measure, we can contemplate the future here with some confidence. Yes, it is a long game.  But this old head says that youth, mobilised in the cause of justice, is unstoppable and will bring about radical change. That’s my view from where I stand here in Manchester, England. How do you see it from where you are?