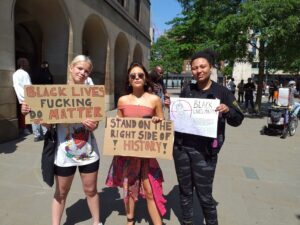 The Right Side of History

Every evening, Tolani Boroface took a walk down her street all by herself, ignoring greetings from neighbours and street folk who looked at her with disdain. She had killed her daughter, they believed, and nothing anyone said could change their minds. Tolani walked to clear her head. This had started four days after Grace was buried – the rumours filtered to her ears that it was because she took her daughter to the End SARS protest that she got shot. Who encourages their children to go to protests in Nigeria? the women who had come to condole with her asked themselves. They’d gathered in front of her apartment, offering tidbits to the story, clasping their arms on their breasts, tying and retying their wrappers while at it.

The women had come the morning after Grace died at the protest in Ikeja. At first, they came in groups of threes and fours, chatting on about the protests across the country all the way, then throwing themselves on the floor once they got to Tolani’s door, weeping uncontrollably. When they stepped out, they cleaned their eyes and talked loudly, not caring if Tolani heard.

So, when Tolani finally heard, she began to take the walks. She would walk to the end of the street – to the junction where she used to go with Grace to buy fruits and vegetables, then walk back home and lock herself in. The fact that her neighbours and friends, people who’d known her for years and knew how much she’d adored Grace could say such unheard-of things tore her heart apart.

On the sixth day after Grace died, Tolani locked herself in. She took some of Grace’s photos and her clothes, especially the ones she remembered seeing Grace in few days before her death and believed still had her smell. She took them into Grace’s room, sniffing and sobbing. Not even the laughter coming from her neighbour’s children distracted her. She cut herself with the kitchen knife and felt the blood from her stomach spilling through her fingers as she lay numb on the floor. Then she noticed a photo pinned to Grace’s wall. It was of three young women carrying a placard. The photo was taken at a Black Lives Matter protest somewhere and Grace had printed it from the internet. The white girl in the centre of the photograph was dressed in a sleeveless gown and wore sunglasses. The placard with her had the inscription ‘I stand on the right side of history’. Tolani thought the girl was Grace. The photo held her gaze and the inscription played in her mind. Suddenly, her cell phone rang. The phone was on the bed, and if Tolani could reach it, she could somehow live, for she now knew that Grace died standing on the right side of history, protesting injustice and hate, doing what many young people like her did across the world.

whispering nirvana is a construct

and you’re here for us to do the construction

play by play to reach high, because

That don’t fly for me, I need somebody grounded

There are journeys we have to go on and it won’t be easy,

Truth is I’m looking for a friendship, a comrade-in-arms

Then maybe at days’ end, I won’t have any qualms

If we sit back-to-back on evening steps, and doodle  🖤s on my door.

There are journeys we have to go on and it won’t be easy,